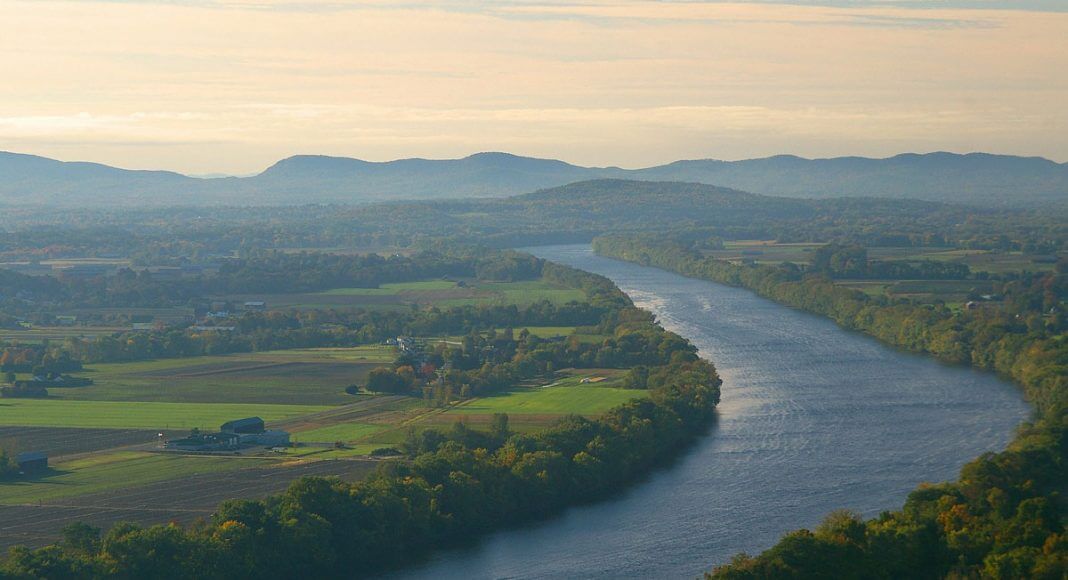 You can watch most of the past events in this series on our youtube channel:

Interested in participating in this series in a more hands-on way? We are forming working groups of 5-15 members—each co-convened by a Native and non-Native team. These are meant to a collaborative learning space where participants follow the lead of Native-led initiatives to repair harm, build relationships, and restore justice. Read about and apply to participate in the Working Groups here:

2020 was the 400th anniversary of the Mayflower’s landing in Wampanoag territory in 1620. People in the U.S.—and white people in particular—have yet to reckon with the centuries of violence and conflicts over land, resources, and values that began with the arrival of Europeans. The way this history is most often told—by settlers’ descendants—excludes the voices of Indigenous peoples, downplays the systematic violence and attempted erasure that Indigenous communities have survived, and raises many questions about who gets to shape our understanding of history and why. The continued erasure of Indigenous stories and perspectives, in history and the present time, calls into question whether colonialism is really “history” at all—or a system and set of policies that still actively shape communities in this region today.

As an organization based in the Kwinitekw/Connecticut River Valley, Karuna Center for Peacebuilding is excited to announce a local dialogue and event series that will explore many of those questions—“Erasure and Restoration: An Exploration of Past and Present in the Kwinitekw Valley’s Indigenous Communities.” Through events facilitated by Indigenous people and non-Indigenous allies, the series will consider who the narrators of Indigenous history are, make space for a strengths-based retelling, and analyze the meaning and matter of relationship-building, reconciliation, land caretaking, memory, and inclusive curricula that explore Indigenous histories, cultures, and lived experiences.

This program is funded in part by Mass Humanities, which receives support from the Massachusetts Cultural Council and is an affiliate of the National Endowment for the Humanities.

Additional funding for this event series is provided by the Ellis L. Phillips Foundation. All of our work is made possible by Karuna Center’s donor community. Thank you.

Upcoming Events in this Series

Past Events in this Series

We aim to share engaging and interactive resources—from books to videos to podcasts—that provide some base knowledge for our public events: 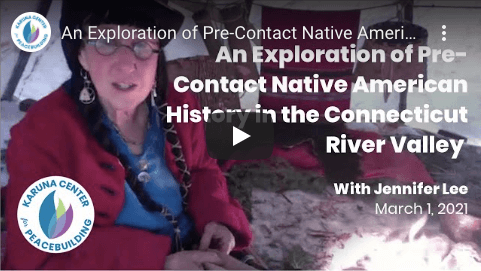 In this Zoom talk and Q&A, Jennifer Lee shared her lifelong study of Native history of the Connecticut River Valley, beginning with Northeast Woodland lifeways prior to colonial encounters. From her Eastern Conical Wigwam, furnished in 18th century style, Jennifer explored pre-contact history, colonial invasion, the trade era, and the impacts of colonization that are still present today.

The event is free and open to the public but registration is required. 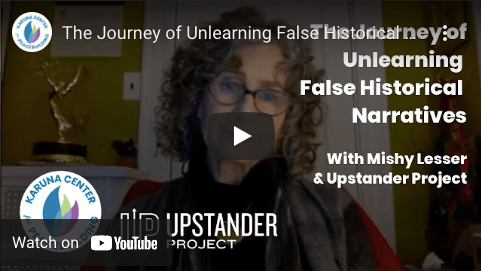 In this conversation on “The Journey of Unlearning False Historical Narratives,” Paula Green and Mishy Lesser will discuss the importance of anti-colonial education, decolonization, and developing the skills of upstanders.

Beginning with Mishy’s trajectory from her family origin, to her two years in Chile and 10 years in Ecuador, to her work with the Upstander Project, the discussion will explore the Upstander Project’s work with educators on topics ranging from post-genocide Rwanda to the genocide of Indigenous People in the US. The Upstander Project seeks to serve mass audiences by challenging indifference to injustice and raising awareness through learning resources, workshops and original documentaries. Mishy will draw on lessons from the development of the Dawnland teacher’s guide, an educator’s guide to teaching the film Dawnland, an Emmy award-winning documentary that examines the relationship between the taking of Indigenous People’s land and the taking of their children.

GREAT FALLS: DISCOVERY, DESTRUCTION AND PRESERVATION IN A MASSACHUSETTS TOWN

This was the first screening in the Hidden Landscapes film series organized by Nolumbeka Project. All screenings were free and open to the public.

In Great Falls: Discovery, Destruction and Preservation in a Massachusetts Town, professional, Native and antiquarian researchers combine to investigate the archaeological history and modern legacy of Eastern Native civilization in Turners Falls, MA.

As the town of Turners Falls, Massachusetts attempted to expand the runway to its airport, their plan called for the removal of a low hill that contains what Native American tribal representatives identify as a ritual site – a ceremonial stone landscape. The surprising discovery and the on-going effort to understand and protect what may be an extraordinary historical asset, is a dramatic story of environmental and cultural preservation. Watch the trailer

Each part of the screening was accompanied by a discussion with Doug Harris, Preservationist for Ceremonial Landscapes and veteran of twenty years of historical preservation work in the Northeast; and Ted Timreck, a Peabody award-winning documentary filmmaker whose programs have been featured on PBS and other networks around the globe.

Registration is restricted to staff, leadership, and board members of land trusts, and other conservation and land based groups. To register, please email kristine@karunacenter.org.

Join Peter Forbes for two sheltered conversations among practitioners about the primary reasons why land justice is central to the future of land conservation and what the obstacles are that stand in our way. The goal of these two presentations is to introduce concepts deeply enough for practitioners to make their own decisions about how to move forward.

The introductory dialogue (one hour) offers an overview of what land justice means to conservationists, why it’s important now, and introduces terms and purpose. We will briefly introduce the work of First Light in Maine.

The second dialogue (two hours) will explore what is at stake and what can be gained. We explore the differences between access and belonging and the difference between charity and reciprocity and why these concepts are important to land justice. We will explore tools that other land conservation groups are using to share power and land, and how these tools are changing who they are and what conservation means. We will do a deeper dive into what land justice asks of us and our organizations. 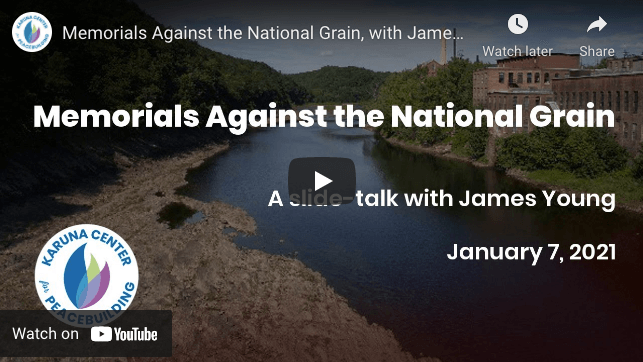 MEMORIALS AGAINST THE NATIONAL GRAIN

In this slide-talk on “Memorials against the National Grain,” James Young explores a series of memorials and “counter-memorials” built to commemorate events that go against the grain of traditional, self-aggrandizing national memory. Beginning with a discussion of Maya Lin’s design for the Vietnam Veterans’ Memorial on the Mall in Washington, D.C., he traces an arc of design forms meant to counter conventional monuments’ self-certain celebration of a nation’s history. In this vein, he shows how a new generation of German artists and architects took their inspiration from Maya Lin in their Holocaust-themed “counter-monuments,” including the Denkmal for Europe’s Murdered Jews in Berlin. From here, Young turns to an examination of what he believes is America’s greatest contemporary counter-memorial, The National Memorial for Peace and Justice, in Montgomery, AL, also known as “the lynching memorial.” 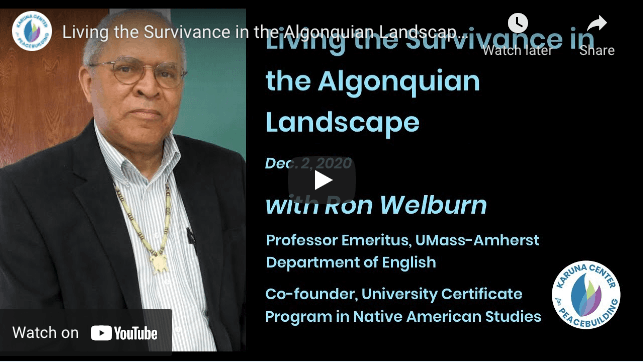 LIVING THE SURVIVANCE IN THE ALGONQUIAN LANDSCAPE

Responding to the desire expressed by some participants in the Connecticut River Valley as Native Space program to appreciate contemporary Native life in this region, Ron Welburn will utilize his personal experiences and life learning as someone of Indigenous heritage. He hopes to illuminate Native ways of survival and survivance as dynamic in spite of historical and modern pressures making an impact on cultural identity.

Ron Welburn is an emeritus professor in the English department at UMass Amherst, where he served as director of the department’s American Studies Graduate Concentration and is a co-founder of the University’s Certificate Program in Native American Indian Studies (in Anthropology), serving as its first director for nine years. He also chaired the Five College Native American (née American Indian) Studies Curriculum Committee. Ron’s hometown is Berwyn, Pennsylvania, and he grew up in Philadelphia. He graduated from Lincoln University, the University of Arizona, and NYU. He holds an abiding interest in the histories and survivals of Native families of the Atlantic coast, considering that he is an Accomac Cherokee descended from the Gingaskin Reservation on the Virginia Eastern Shore, as well as the neighboring Assateague people, Lenapes, and African Americans; and he is related to Native families on Bermuda whose ancestors were sent into slavery. Ron is seeking ways to coordinate Indigenous studies with Jazz studies towards a new paradigm for American studies, and is studying Native American contributions to jazz, blues, and popular music. His articles, book reviews, and poems have appeared widely. 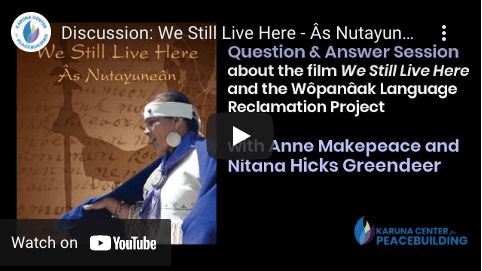 We Still Live Here – Âs Nutayuneân is an inspiring story of Indigenous cultural revival. At this time of year, millions of Americans will be reenacting a Thanksgiving myth of peaceful European settlement in the Northeast. This film tells a powerful Wampanoag story about restoring a language decimated by the reality of colonization—and the hope that this cultural restoration brings for the future.

The film’s story begins in 1994, when a Wampanoag social worker named Jessie Little Doe began having recurring dreams about familiar-looking people from another time, who were addressing her in a language she did not understand. This began an odyssey that would lead her to receive a Master’s Degree in Algonquian Linguistics from MIT and to found the Wôpanâak Language Reclamation Project. Today, members of the Wampanoag nation are successfully bringing a language back to life that had not been spoken aloud in more than a century.

The virtual screening was followed by a live Question & Answer session with Anne Makepeace, the filmmaker, Jennifer Weston, Director of the  Wôpanâak Language Reclamation Project, and Nitana Hicks Greendeer, a teacher, researcher, Wôpanâak Fluency Coach, and citizen of the Mashpee Wampanoag Tribe. 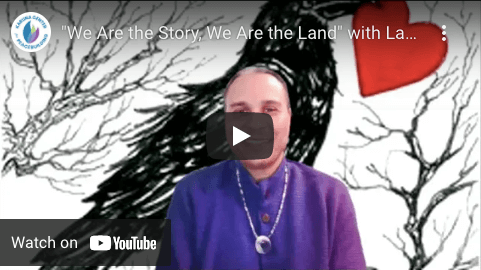 Join Larry Spotted Crow Mann for an engaging talk that will focus on the spiritual, cultural and social significance of ‘Place and the Art of Story’ on the Indigenous peoples of New England. This event will highlight how a colonial narrative has harmfully impacted both Native people and non-Native people through a conversation that centers on the personal journey of the survival and perseverance of Nipmuc People and their continued efforts to share their story, while also shaping new ones for the coming generations.

The event closed with a discussion on the many varied walks of life that all humans come from and how those ‘different stories’ have been used to incite fear throughout history. In Larry’s words, “We must, as human beings, find ourselves in each other’s story and reconcile that bond with unity, love and respect.”

With Dr. Lisa Brooks, Professor of English and American Studies at Amherst College, and author of The Common Pot: The Recovery of Native Space in the Northeast and Our Beloved Kin: A New History of King Philip’s War; Dr. Margaret M. Bruchac, performer, ethnographer, historian, and museum consultant; and Cheryl Savageau, poet, memoirist, storyteller, educator, and the author of Out of the Crazywoods.

Kwinitekw, or the Connecticut River, has long been an Indigenous “super highway” and a crossroads of nations. With this Zoom conversation, we invite you to interact with the Connecticut River Valley as dynamic Native space through a conversation with Abenaki writers Cheryl Savageau, Marge Bruchac, and Lisa Brooks. Learn about deep time stories, Indigenous history, movements and migrations, and continuing knowledge exchange. This is a dynamic place from which we are all constantly learning.

Readers may want to explore Lisa Brooks’s “Our Beloved Kin” website, which functions as a reader’s companion to her book Our Beloved Kin, especially the pages on the Connecticut River Valley “path.” This path features a story, “Wôbanakiak: Amiskwôlowôkoiak – the People of the Beaver-tail Hill,” told by Marge Bruchac and a poem, “At Sugarloaf,” by Cheryl Savageau, with which our conversation will begin. Lisa Brooks will host the conversation, which will include a Q&A session, building a space of exchange.

Upon registration, participants will be asked to do a bit of “homework,” reviewing various resources from Dr. Brooks, Dr. Savageau, and Dr. Bruchac to prepare for an interactive and engaging event.