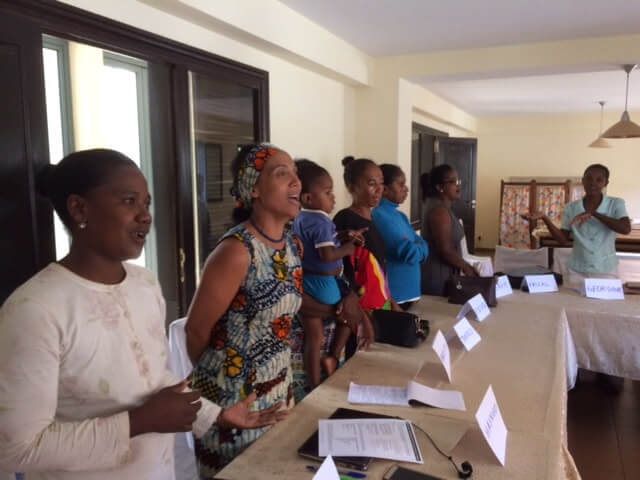 This International Women’s Day, we are highlighting the accomplishments of participants in the Lifting Women’s Voices, Lifting Our Communities project. Though this was a relatively small-scale initiative, it is having an impact—reflecting the collective power and dedication of the women who participated. Karuna Center’s team trained and coached 90 women in rural Madagascar in advocacy last year, increasing their leadership skills as their communities face rapid change.

“It’s important for us to step up and take initiative—because now, our husbands and others in society are listening to us and respecting what we have to say.”

When our project began, women were typically excluded from community decision-making processes led by men. At the same time, Madagascar Oil, like most companies, did not yet have procedures in place for consulting women about risks, impacts, and opportunities to provide support to communities affected by oil extraction—but the company was eager to collaborate.

Now, as the project comes to a close, women leaders are well-respected within their communities. They manage local projects and advocate directly both to government officials and the oil company. In each of the three project communities, they have established active women’s associations:

In addition to those community projects:
​

From the start, the project team took care to meet with men to include them and gain their support. Women’s leadership positively impacts the entire community—but the shift in power can be followed by backlash. When men are engaged as partners in women’s empowerment, this risk is reduced and the benefits multiply.

Unfortunately, we were unable to complete plans to train adolescent girls in addition to adult women, because increases in dahalo raids along the roads to project communities made travel too dangerous for both trainers and participants. Instead, we relied on the leadership of women who had already been to our advocacy workshops, and project mentors coached them over the phone. These local women continue to lead their communities toward greater security and resilience in the face of change.
​

This project has been supported with a grant from the United States Department of State issued in 2017.